Dedicated on September 11, 2011, tens years after the tragedy of the terrorist attacks in New York and Washington D.C., the Watauga 911 Memorial is a piece of steel acquired from the World Trade Center.

On July 22, 2011, the City of Watauga welcomed this piece of history to its Central Fire Station which was later set up as a memorial in front of the Fire Station to remind us of all the lives lost on that fateful day.

Visit the memorial at: 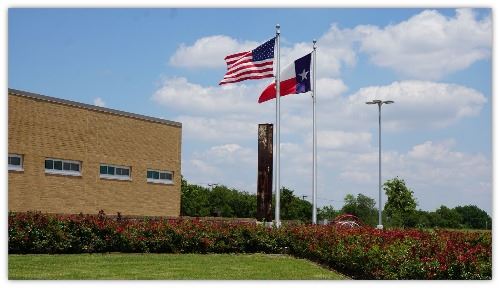 The Watauga Fire Department began the process of obtaining the steel in 2010. Approximately 15,000 cities across the nation made application to receive a piece of steel from the World Trade Center. The City of Watauga was honored as a selected city.

Watauga Firefighters Ben Westcott and Jeff Hawkins left Sunday, July 17, 2011 on a five day journey to New York City to retrieve a section of steel from the World Trade Center. The section was identified as belonging to one of the Twin Towers, but there is no way to tell which one. The two traveled approximately 3,300 miles.

While in New York, they met with and were escorted by members of FDNY Rescue Company #2. During the return home, the two were graciously received by the Knoxville Tennessee and Hopkins County Texas Fire Departments. Both departments provided food, lodging and secure storage for the artifact. Upon returning to the City of Watauga, the North Richland Hills and Haltom City Fire Departments assisted Watauga units in escorting the piece of steel down Denton Highway to Watauga’s Central Fire Station.

The memorial stands as a testament to the sacrifice of the men and women in uniform who have paid the ultimate price for their duty.